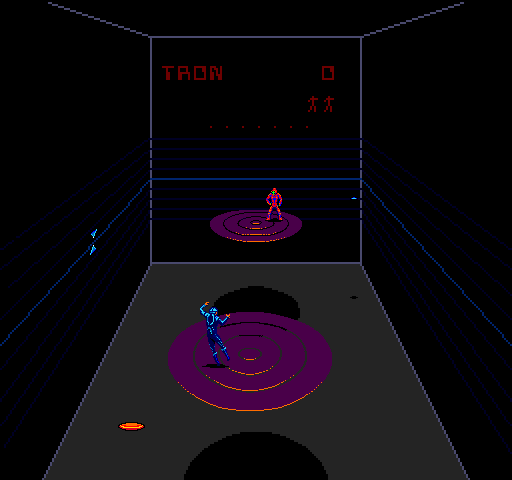 Discs of Tron is the second arcade game based on 1982 Disney film Tron. Description While the first Tron arcade game had several mini-games (Gridbugs, Light Cycles, entering the MCP cone and Digital tanks), Discs of Tron is inspired by the Jai alai sequence in the original 1982 film in which Kevin Flynn is forced to play against Crom, leading to Crom being "derezzed" by Sark. Tron is also introduced later, as Flynn witnesses him competing against (and defeating) four of the MCP's "warrior elite". In the movie, Flynn and Crom stand on top of a platform made of five concentric circles that disappear if an energy pellet, thrown from an arm extension, touches a target between both platforms. Discs of Tron uses several platforms, and the player must beat Sark by throwing discs at him (a maximum of three at a time, which would return to the player) and eventually derezz him or push him outside the platforms. While the player, along with the discs, can use a deflector, Sark has two more weapons: a chaser and a super chaser, that can only be destroyed with the discs. As the game progresses, the player is given different configurations of platform rings to jump and stand on. The video game also uses a spinning knob that is used to move a mouse-like cursor around the playing field so you can judge where the discs will deflect off the walls and on later levels the knob can be pulled up or pushed down depending on the height of the platforms.

Discs of TRON is the second of two TRON XBLA arcade games released by Midway and based off the 1982 Disney movie. This title has TRON facing off against Sark on the Game Grid, moving from platform to platform, throwing discs at each other in an attempt to knock their opponent off their respective platforms, or de-rez them.

Players can bounce discs off of walls, or use a "Block" button to deflect the enemy's disc. In addition to Sark's attacks, outside obstacles, such as barriers that must be broken through and homing seekers, work to increase the challenge.

The Xbox Live features add separate (though not head-to-head) competitions to allow players to work for the highest scores and complete challenges in the fastest times.

It should also be noted that about half way through the game or so you could not only move your aim point up and down the wall a bit, but that after a few levels you could then pull it up further and it would aim at the ceiling.

I've spent countless hours on this title. To the point that I mastered it. I could, and have, spent 8+ hours playing this on one quarter. To the point that the game would be out of order the next day after a marathon. I found out that apparently it was over heating and killing a fuze lol....my bad :)

There spots you can aim at on most levels that will be a one shot/disc kill right at the start of the level. Some levels it isn't obvious though, like aiming behind you and to the side a bit.....the disc takes a long, slow flight around and grinds its way through his head :)

I'm happy it is on this site but I can't honestly see playing it very well without the stick and spinner/wheel controls.